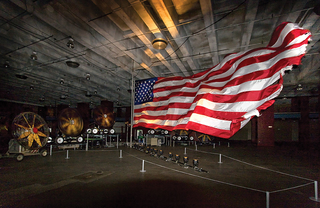 William Pope has rubbed elbows with Sean Penn, Brad Pitt and Willem Defoe in his 30+ year career. He is a Guggenheim fellow as well as the controversial National Endowment of the Arts recipient/ex-recipient. Now, in one of the most highly anticipated shows of the season, the New Jersey-born and Chicago-based performance artist par excellence will be showing at MOCA's Geffen Contemporary.

Pope’s aim as an artist has been, as he's put it, to “politicize disenfranchisement”, which given recent national events, is a subject still very central to the African-American experience. The centerpiece of the installation at MOCA will feature a 16-foot tall and 45-foot long American flag kept aloft with fans and ironically titled “Trinket” in reference to the presidential lapel pin fiasco of 2008.

[photo via The Observer]