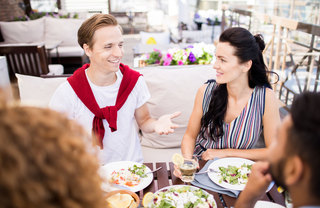 You can find just about anything around the affordable apartments in LA. This is one of the largest and most spectacular cities in the world, so it makes perfect sense that just about any niche you can imagine would be fulfilled within its confines, and that includes the ever-elusive vegan-friendly bar. Sure, it might not be a common sight if you’re living in other cities, but in Los Angeles, you’ve got more than a fair few to pick from. Here are just a few of the options that await you around town.

We’ll start with an option that caters to both vegan and non-vegan palates. This spot on West Sunset Boulevard is what you might call “mostly vegan” and they definitely don’t skimp out on the food choices there, so you can have your plant-based chow down while you enjoy some drinks with your friends (the pizzas are an especially fine choice). At the same time, though, you don’t have to worry about your non-vegan pals being able to join in, as the menu includes classic burgers, chicken, and all the other items your meat-eating buddies will enjoy.

Head to West 4th Street and you’ll come across Bar Ama, one of DTLA’s more prominent establishments. The Tex-Mex menu here is filled with vegan favorites and meat-filled options alike. Among those vegan plates, though, you’ll definitely want to try out the “vegan super nachos” and consider washing them down with some of Bar Ama’s amazing tequila.

While the stencil of action-movie icon Danny Trejo might be one of the first things you notice when you saunter into Trejo’s Cantina on North Cahuenga Boulevard, you’ll also be delighted to learn they’ve got an ample menu of vegan delights for you to try out while you’re there. Be sure to check out what specials are on the menu, and if you’re after a real treat, stop by on Taco Tuesdays and prepare to be amazed.

If you find yourself on Sunset Boulevard near Echo Park, you’ll want to dip in at the Sage Vegan Bistro and try some of their superbly-crafted vegan dishes on for size. The Loaded Nachos always make for a good choice (and their stuffed with yummies like jackfruit, cashew cheese, and guacamole). Though, you might also want to try some of the vegan pizzas or desserts too — it all depends on your mood!

Los Angeles has even more amazing offerings, especially when you’re living in some of the most attractive sectors of the city — like downtown. Here, at residences like Eighth & Grand, you’ll enter a world where just about every one of your desires — from fabulous shopping to fine dining — are right at your fingertips. There’s plenty more to explore in DTLA, so if you’re ready to experience it all for yourself, be sure to drop us a line and learn how you can make your move to the new standard for city apartment communities — Eighth & Grand.