" Fun Things To Do In Downtown Los Angeles This Spring

To Do Downtown LA This Spring 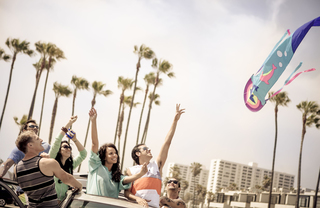 Spring is in full swing, and that means that there are plenty of outstanding events, festivals, and things to do in the Downtown LA area. Instead of spending the time cooped up indoors, why not consider venturing out into the city to experience the wide variety of exhibits, arts, culture, music, and more that the area has to offer?

From classics to modern, Los Angeles is home to some of the best exhibits in the country. Here's what should be on your radar in the coming months.

This found footage exhibit, playing at the Museum Of Contemporary Art Geffen Collection through June 12th, brilliantly uses contemporary imagery to show the African-American journey and identity through a unique perspective. There's a personal angle, injected by excerpts from Jafa's 2012 documentary, Dreams Are Colder Than Death, and on the whole, it's a moving display that encapsulates what it means to contribute to African-American representation in the context of the multitude of other voices doing the same.

For art with more of an esoteric angle, The Basilisk, on display at the Nicodim Gallery through May 27th, might be right up your alley. This wholly unique exhibit conjures up powerful imagery presented in a manner quite unlike the norm. This exhibit will certainly make you think, and will definitely give you cause to ponder the beyond. For your fill of the celestial and otherworldly, you'll not want to miss this impressive display.

Live music in Los Angeles? Not exactly what you'd call a rarity, but something to be treasured and celebrated all the same.

Ella At 100: Celebrating The Artistry Of Ella Fitzgerald
The name says it all; the GRAMMY Museum will be holding a special event, Wednesday, May 3rd, to explore and honor the legacy of sensational jazz great Ella Fitzgerald. The finest artists will be in attendance, performing the First Lady Of Song's classic hits. Prior to the event, guests will have an opportunity to tour the museum's new Ella Fitzgerald exhibit, which chronicles her storied career in unparalleled fashion. Fans of jazz and great music in general will not want to miss this.

Yo-Yo Ma, Edgar Meyer, & Chris Thile In Concert
To get a glimpse of some virtuoso string work, you'll have the opportunity to see these three masters of their instruments perform at the Walt Disney Concert Hall on Wednesday, May 3rd. These artist's reputations precede them; you need only take a look at their long list of recording, performances, and depth of musical training to catch a glimpse of their talent. Anyone who is a fan of orchestral, folk, bluegrass, and traditional stylings will surely be appreciative of this show.

Good cinema is the lifeblood of Los Angeles. Here are some of the film-centric events you should be aware of this spring.

Want to see what the next generation of student filmmakers are up to? The CalArts School Of Film/Video is presenting this selection of juried, special screenings that showcase the best short and feature-length films by students in their programs. These represent the hard work and rigorous training these young future filmmakers have put in, so be sure to show up if you want to support their efforts and learn about their vision.

This is an annual event dedicated to celebrating films that appeal to all ages. This year, the festival will feature several full weekends of short films, starting April 29th and ending May 7th at REDCAT. The works are representative of filmmakers from around the globe and designed to give entire families something to wonder at in both live action and animated form.

Fans of the comedy scene know that Los Angeles is an epicenter for great performances from the country's best and funniest acts. This spring, you might have the pleasure of seeing one live at any number of the city's downtown venues.

For instance, you might decide to see an UnCabaret show. They're well known for their Sunday night affairs, and while the venue is somewhat tucked away, it's well worth the effort to find. They've got a knack for showcasing quirky acts, and this May, they're featuring performances from Eddie Pepitone, Jen Kirkman, Erin Foley, and many more.

This is another in a long list of things that Los Angeles does best. Here are a few of the upcoming cultural events you'll not want to miss.

Fans of popular anime program Sailor Moon will no doubt be delighted by the LA Moonfest, which is now celebrating 25 years of the hit series. Even those who aren't specifically Sailor Moon aficionados may want to scope it out just to get a view of the amazing spectacle. The two-day meetup, which takes place at the Doubletree By Hilton Los Angeles Downtown on the rooftop Kyoto Garden, will be on May 13th and 14th. The event features a costume contest and a panel with the anime's voice actors.

LA's sports teams are world famous. This spring is the perfect opportunity to show them some love and attend a game.

The Men's basketball season might be drawing to a close, but WNBA games are just about to hit their stride. During may, the LA Sparks will have several home games taking place at the Staples Center, so be sure to snag some tickets early so you can get some good seats to see them face-off against some of the league's best competition.

Downtown LA Apartments Put You Close To The Action

If you want to be in the thick of things for any of these spring events, then you'll need to survey the various Downtown LA apartments that will get you right near the action. Of course, you won't have to search for too long, because the obvious choice for superior luxury is Eighth & Grand, the pinnacle of downtown life. Leading the charge in Downtown's resurgence with beautiful floorplans, amazing building amenities, and stunning city views, Eighth & Grand has created an urban complex specifically designed to appeal to the most discerning tastes.