" Have You Heard About The Infinity Mirrors? 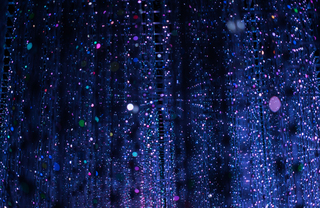 Take a look at this article. Though the excitement for the aptly titled Infinity Mirrors exhibit has been mounting, there's still a good chance you haven't even heard about it or fabled institution that's hosting this magnificent work (as stated, nearly 150,000 people logged onto the Broad's website to get tickets, while there were only 50,000 tickets). It's almost as if the event organizers were omniscient. The Broad's museum director, Joanne Heyler, claimed that the tickets would sell out "in a matter of hours" due to "high demand," and the statement turned out to be no mere exaggeration.

Why so much buzz? What are the Infinity Mirrors all about? Fear not, we're going to break down why this is an exhibit that is not to be missed, and why both individuals living in Downtown Los Angeles and interested art enthusiasts from all over the nation have been clamoring for this particular project to be displayed as such.

First Things First. What Are The Infinity Mirrors?

We can turn to The Broad's website for information on that:

This will be in addition to other works by Kusama, who has enjoyed a lengthy career creating some interesting pieces of art (more on that later). The Infinity Mirrors themselves are mirror-lined rooms with various patterned imagery and lights. The end result, according to art experts, are a series of environments that afford viewers "the chance to step into an illusion of infinite space." This Infinity Mirrors exhibition includes six such rooms, the greatest amount shown together simultaneously (the artist has produced twenty such rooms over the course of her career). There's even a book about the exhibition itself.

Another thing to note is that this is a traveling exhibition, part of "most significant North American tour of her work in nearly two decades." It was organized by Mika Yoshitake of the Hirshorn Museum in Washington D.C., where the exhibit made its debut to great fanfare:

"During the three-month run of the show, the museum welcomed 475,000 visitors—the highest spring visitation in its history, and double the average attendance for that period."

The article adds that the exhibit was "Instagrammed" some 34,000 times, by the likes of notables such as Ivanka Trump, even. According to estimates, the showing was so popular that the Hirshorn was able to increase its membership by a ludicrous 6,566 percent:

"Before the show opened in February, the Hirshhorn had a “small but dedicated” core group of around 150 members, according to a representative. By the time the show closed this weekend, that number had ballooned to 10,000."

The windfall helped increase the Hirshorn's budget, expand its operations, and brought a newfound appreciation for the arts to the institution and Washington D.C. Perhaps the same will be true when exhibition comes around to Los Angeles? Regardless, it serves as a testament to Yayoi Kusama's star power.

Just Who Is This Artist?

If you've not yet heard, Artnet provides a reasonably thorough description. Here is one excerpt:

"Yayoi Kusama is a Japanese contemporary artist working in a variety of media, including painting, sculpture, film, and installation. Producing a body of work unified in its use of repetitive, densely patterned motifs, much of Kusama’s practice is born from an obsession with obliterating the self in the many, as seen in her hallmark work Infinity Mirror Room (1965)."
She was born in 1929, in Matsumoto, Nagano prefecture, Chubu, Japan. The artist has always had a flair for the extravagant:

Influential throughout the 1960s and 1970s, her works have taken twists and turns across "a variety of formats and theoretical concerns, including pop, minimalism, and surrealism." Part of the secret to her stunning creativity? Her ability to recreate what she sees within her own mind:

"From an early age, she was prone to hallucinations due to mental illness, vivid experiences of the world distorted and enhanced by colors and shapes."
On top of being highly creative, she's also found a way to inject socially conscious themes throughout her body of work:

"Kusama staged multiple fully nude happenings across the city to protest the war in Vietnam, economic disparity and the excesses of Wall Street, and the hierarchy and gender inequality of museums."
In other words, she's a real "artist's artist," and the Infinity Mirrors exhibition is a prime chance to see exactly how such a master views the world and expresses their views through a complex visual medium.

This All Sounds Amazing. Can I Still Get Tickets?

As noted in the TimeOut piece, the overwhelming demand for this show has prompted The Broad to create additional availability. More tickets will go on sale on October 2nd, at noon. You'll have to be in The Broad's online waiting room by noon, on the dot, since the demand will be so high, and you can find more details about the exact process here.

Those who miss out on this second-round of advance tickets will have one final chance once the show opens. There will be same-day standby lines, selling about 15-20 tickets per timeslot. You'll have to be prepared to pay a bit extra, though. Whereas the advance tickets are $25 a pop, those same-day tickets will run about $30—still worth it for what is sure to be a dynamite exhibition.

A final note, be sure to check out the exhibit's FAQ page so that you can inform yourself on all the pertinent details regarding the show and procedures for viewing the exhibit.

Infinity Mirrors isn't the only exhibit on display in town, and it certainly won't be the last to grace the city. To avail yourself of all the great art that comes through, a premiere residence like Eighth & Grand is the perfect choice. A convenient neighborhood location, a wide variety of floor plans, and range of amenities make for the ideal rental community in the Downtown area. Be sure to check out what this "grand" property has to offer and remember that this is the prime spot for art lovers of all stripes.