" The Cinespia Cemetary Screenings Will Be a Movie Lover’s Dream 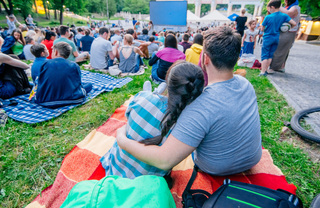 The Cinespia Cemetary Screenings Will Be a Movie Lover’s Dream

If you love movies (and let’s face it, there are few in the LA apartments who don’t), you may well have asked yourself how you can enhance your film-viewing experience. You’ve done the big multiplexes, the artsy single-screen theaters, and seemingly everything in between — now, it’s time for a change of pace. The Cinespia Cemetery Screenings will be offering a chance at exactly that, with a classic May movie lineup at Hollywood Forever Cemetery that will totally transform your ideas about how best to enjoy a good cinematic feature. We’ve got the details here, so let’s jump in and explore what you’ll need to know.

What’s the Idea Behind Cinespia?

To provide a bit of backstory to the idea (and history) that fuels Cinespia, we’ll first turn to this article from Thrillist, which detailed the concept’s rise to prominence back in 2017. That concept, by the way, is a simple (yet amazing) thing:

“Surrounded by the gravestones of Hollywood legends, a sold-out crowd of 4,000 people gather with picnics and booze in tow to watch their favorite movies on weekend nights. With elaborate movie-themed photo booths, notable DJs and dance parties, and occasional all-night marathons, these Cinespia screenings offer a giant living room for all of LA.”

In other words, adults both young and old flock to the famous Hollywood Forever Cemetery (at the Fairbanks Lawn, specifically), to enjoy some old (but memorable) movies out in the open on a big screen, surrounded by fellow movie lovers, and with some welcomed extras that only enhance the experience. This is nothing like going to the multiplex, and gives moviegoers a chance to take in these classic films in a setting that few others can imitate. Surrounded by the tombstones of legends like Rudolph Valentino, Peter Lorre, and Jayne Mansfield, there’s a certain energy that can’t be replicated in the theatre, and, as we all know, being outdoors on a warm spring night is a feeling that always warms the heart.

How did this amazing idea first take off, you might wonder? Cinespia was first conceived in 2002, by founder John Wyatt, and when they held their initial screening of Strangers on a Train, there were only 400 people in attendance. It was an instant success, you might say, for subsequent screenings drew larger and larger crowds, and today, as Cinespia is now drawing closer to two decades old, thousands head to the cemetery to check out the movies on offer. This event routinely sells out to the number of 4,000 fans — all the more reason to make sure you get those tickets as soon as you can!

Staying this popular in an age where streaming movies at home is all the rage is no mean feat, and one that Cinespia has accomplished in part because of the unique atmosphere it sets, the sense of community they’ve managed to build, and, of course, the awesome film selection that their lineup is well-known for. Let’s take a look at which movies will be on the list for this upcoming installment of the event, shall we?

What’s on the Lineup This Time Around?

In a word, the movies that Cinespia screens could be described as “classics.” Wyatt, who says he has a “specific formula” for selecting the movies for each installment of Cinespia, tends to choose movies that will challenge audiences in one way or another, and are timeless in the sense that they possess a great story that audiences can understand and enjoy regardless of the particular era. Knowing that, this May’s Cinespia lineup most certainly fits the bill, and you’ll have the opportunity to see:

Be sure to check the calendar to pinpoint the exact dates these screenings will take place, and to get your tickets before they’re sold out!

Take Your Film Experience to the Next Level at the LA Apartments
When you’ve had your fill on fine films in the open aire, you can always come back to your luxurious residence to catch another one. This time, though, you’ll be surrounded by all the comforts of a contemporary downtown living space — at Eighth & Grand. This is what living in LA is supposed to feel like, so be sure to take the “grand” tour, and drop us a line to learn more about how you can become a part of this amazing downtown community.