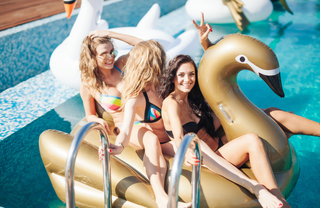 It’s always sunny in Los Angeles, but now that the days are officially as long as they are going to get, it’s time to take a look at our options for cooling off – and that means getting wet and wild at the summer’s best roofdeck pool parties! (Eighth and Grand will of course be topping this list as soon as there’s water in the pool, but in the meantime, let’s rundown a list of where Angelenos usually go to beat the heat with some chlorine-infused daytime clubbing.)

> If you get a chance to head out to West Hollywood, Skybar at Mondrian hosts A Club Called Rhonda, a polysexual hard-partying pool party boasting “big beat, thick heat and the softest sheets”. They’ll have all your body music cravings covered every holiday this summer starting July 4th… Isn’t that this weekend? God bless America!