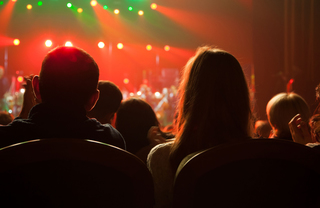 Some films inspire fans to dress up like the characters, memorize the lines or even occasionally write a doctoral thesis. But few movies achieve the status of cult classic. Who can explain the cultural phenomenon behind a Rocky Horror Picture Show or a Big Lebowski? In recent years, the 1991 blockbuster Point Break has become such a film, especially in L.A.

Starring bank robbing surfer, Bodhi (Patrick Swayze) and the undercover agent out to take him down, Johnny Utah (Keanu Reeves), this may be the best movie about skydiving surfers-slash-bank robbers of all time. And to prove it L.A. is home to the best stage adaptation of an action movie ever, Point Break Live! Not only is this hilarious interactive play wet and wild (you may want to bring a poncho), it also gives audience members a shot at getting up on stage and playing the role of Utah. Can you deliver unforgettable Keanu lines like “Woah…” with a straight face? Here’s your chance to find out. PBL has become so insanely popular it now tours the east coast and has outposts in NY and SF. Righteous, brah!

Their last local show of the summer is this weekend, September 5th in Hollywood. Get your tickets now (even if you have to rob a bank and go to StubHub). In the words of the Bodhisattva: “If you want to take the ultimate ride, you’ve got to be willing to pay the ultimate price.”