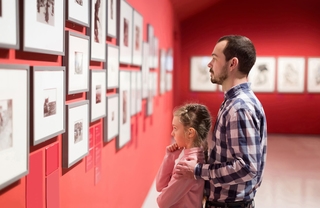 “Eclectic” doesn’t fully express how incredibly diverse music in Los Angeles is. From the storied halls of the iconic Columbia Records building in Hollywood… to the hipster dives of Silver Lake… to the DJ dance parties of downtown – the rich and chaotic tapestry that is the L.A. music scene is like some amorphous multi-genre organism that just. doesn’t. stop. And it wasn’t any easier to wrap your mind around it all in the 80s when L.A.’s Motley Crue, NWA and the Bangles all played in an endless loop on MTV competing for the hearts and minds of the nation’s young.

Now you can relive all the glitz and glam of those lost years at the Central Library’s photo exhibit, “From Pop to the Pit”. The display features 100 rare images from the Herald Examiner archives from 1978-1989. It opened in January and will run to the end of June.

By the way, the library at Fifth and Flower is our city’s other cultural epicenter. And along with the Bradbury Building and Union Station, the Central Library is an architectural landmark that stands as one of the city’s finest examples of the Art Deco style that dominated the 20s and 30s in L.A. Just a few blocks from our downtown development at Eighth and Grand, this booklover’s dream is well worth the stroll.

[photo via the Central Library]