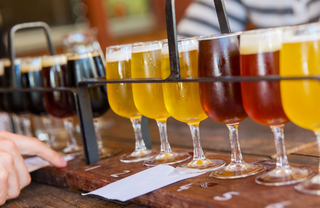 As we mentioned in last week’s rundow of local breweries, the craft beer scene in L.A. has come a long way since 2009. We are in the midst of a brewing renaissance in Southern California, and Los Angeles is the place to be. Drinking, that is.

Produced by the Los Angeles County Brewer’s Guild, Beer Week celebrates its 7th year with a new location at Exposition Park and a host of local sponsors. Celebrating the creativity of local brewers and the bodacious beer culture of Greater Los Angeles, Beer Week will involve participating venues all around town with loads of fun things to do -- and delicious beverages to drink -- all week long. Check out their calendar of events like the beer and cheese pairing crash course at Angel City – or the battle of the bands at The Echoplex!

This Saturday’s June 20th kickoff will feature SoCal favorites like Stone and Eagle Rock as well as food trucks by Cousins Maine Lobster, Grilled Cheese Truck and others. So enjoy, be safe out there and beware the inevitable check points. (Pro tip: Uber it up or go Metro!)

Tickets for the kickoff event at 700 Exposition Park are $45, but many are FREE