" Did You Know These Interesting Facts About the LACMA? 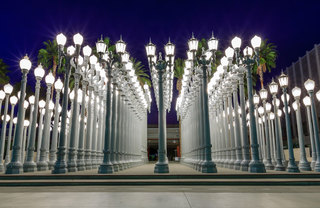 Ah, the LA County Museum of Art. Known more commonly as the LACMA, this storied institution is a favorite for many residents of the Los Angeles apartments, and while it’s certainly possible you’ve been there before, there’s still a good chance there are some lesser-known details about this cultural marvel that you may not have realized. Today, we’re going to pull back the veil and test your knowledge, as we go through a few facts about the LACMA you may have missed.

You Can Get in for Free

While the LACMA does sell tickets, and you’ll need those to view the museum at some times, there are also times where admission to the LACMA is free. Members, for instance, can get it in free anytime. LA County residents (who have a valid ID) can enjoy free admission from Monday through Friday after 3:00PM, and youngsters under 17 can get in free as well. Be sure to check their tickets page to learn the details.

With all those exhibitions and collections, the LACMA has a grand body of imagery for picture books, and they’ve published a good deal of their past exhibitions in the form of catalogs that you can access in print and online. The online versions are great for researching famous works of art, and the print versions look great perched at the end of a coffee table.

It’s the Largest Art Museum in the West

The Western United States, to be specific, but yes, the LACMA is the largest art museum for miles around, and holds some 150,000 works that range from ancient humanity all the way to the present. In addition, they attract almost a million visitors every year.

It Was Originally Part of the Los Angeles Museum of History, Science, and Art

What we know today as the LACMA was once part of the Los Angeles Museum of History, Science, and Art, founded in Exposition Park in 1910. It wasn’t until 1961 that the LACMA split off from this organization and gained its own building on Wilshire Boulevard, as an independent organization focused solely on the arts.

There’s a New Building on the Way

LACMA is gearing up for construction, this time, of a new building — the David Geffen Galleries — which is set to open in 2024. This marks a radical transformation of the LACMA, and will fit into a “larger vision” to “redefine and maximize the potential of the museum.”

Not Too Far From the stunning Los Angeles Apartments

The great part about living in communities like Eighth & Grand is the fact that famous LA landmarks like the LACMA aren’t that great of a hassle to get to. If you want to get to the museum from this Downtown neighborhood, it’s pretty much a straight shot down Wilshire Boulevard, and then the magic of the museum is at your fingertips. That holds true for many more of LA’s wonders, so if your goal is to experience the best of the city, be sure to see what Eighth & Grand has to offer, then find out more about making one of these residences your new LA home.