" Check Out These Haunted Places in LA 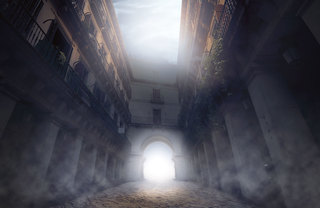 LA has a long and storied history. Pick a direction from the downtown Los Angeles apartments, and chances are you'll run into some building or property with deep ties to the city's mysterious past. Los Angeles has been around for so long, in fact, that there are even a few buildings here you might consider "haunted," for lack of a better term. Whether you believe in ghosts or not is immaterial here. The point is that there are places around the city where people have reported spooky, unexplainable phenomenon, and with Halloween right around the corner, it's the perfect chance to check them out for yourself. Who knows, maybe you'll experience a few frights of your own?

Let's start with an antique haunted location, shall we? The Rosenheim Mansion on Westchester Place was constructed in 1902, by Alfred Rosenheim, when he moved to the city from St. Louis. After its time as a wealthy private residence, it was adopted by a Catholic organization, the Sisters of Social Service, who called the home one of their bases of operation for more than 50 years. Since then, though, it's made an appearance in numerous scary TV productions, including Alfred Hitchcock Presents, Buffy the Vampire Slayer, and American Horror Story.

Who would imagine that a place that brings so much laughter is also known as the site of a few hauntings? The World-Famous Comedy Store on Sunset Boulevard was, at one point in its history, a strip club with affiliations with the mob. It doesn't take a genius to suppose that those terrifying noises one hears when descending to the depths of the establishment might be the decades old cries of the criminal organization's unlucky victims.

The Silent Movie Theater on North Fairfax Avenue was the site of two tragedies, both involving the establishment's original owners. John Hampton regrettably used chemicals to help preserve his film (which gave him incurable cancer) and Lawrence Austin, who decided to reopen the theater following Hampton's demise, was shot dead in the late 1990s by his lover. The two are said to still haunt the theater, with Hampton roaming the upstairs lounge and Austin terrorizing the theater lobby.

Like most, we're sure you'd prefer staying at a ghost-free LA abode. You'll find one of the nicest the city has to offer in the heart of downtown, at the lovely residences of Eighth & Grand. Here, you can enjoy the very best of luxury, comfort, and convenience, all in a location that puts you within arms reach of some of LA's finest establishments. It's urban, Los Angeles living in it's finest form, so if you're ready to take a step into this high life, we invite you to learn more about what Eighth & Grand has to offer, then drop us a line to discover how you can make your move to one of the most pristine communities you'll find in the whole of Los Angeles.