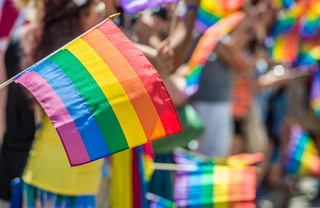 June is almost here, which means that one of the nation’s oldest and most prominent Pride events will be returning to the Los Angeles apartments for another installment — LA Pride Week and the LA Pride Parade:

“Christopher Street West (CSW) organized the world’s first permitted parade advocating for gay rights on June 28, 1970 as a response to and in commemoration of the Stonewall Rebellion on Christopher Street in New York City the year prior. Since then, we have built a rich history as an active voice for the LGBTQ+ community across the Greater Los Angeles metropolitan area.”

This year, like many before it, will be replete with inclusive events, stunning performance, and a celebratory atmosphere for Los Angeles’ divers cultures, unique heritage, and, naturally the LGBTQ+ community. Today, we’re going to take a look at what you can expect from LA Pride Week this year, along with the wealth of events that will be taking place from late May through early June.

As we mentioned, Pride Week will feature a wide array of intriguing events for you to attend. It all kicks off on May 31st, and will be running all the way until June 9th with the Pride Parade. Here’s what to expect...

LGBT Night at the LA Dodgers

Starting things off on the evening of May 31st will be the 7th Annual LGBT Night with the LA Dodgers at Dodger Stadium. As one might expect, you’ll get to experience a baseball game (The Dodgers will be taking on the Philadelphia Phillies that evening), but before the game starts, there will also be pre-game kickoff party at the Right Field Plaza Bar, and some stunning fireworks on the field once the 9th Inning rolls around and some musical entertainment courtesy of DJ Bowie Jane. This event will doubling as a fundraiser for CSW (the group that produces Pride Week and all associated events) and proceeds will also go to help out community-oriented programs like Casa del Sol.

A ticket purchase for this event will net you access to the park starting at 4PM on June 1st, along with special after-hours access running from 9:00PM to 2:00AM. The experience will include the aforementioned DJ music, packed dance floors, a few nicely stocked bars to enjoy, along with some in-character meet and greets with your Universal Studios favorites.

Also taking place on June 1st, the 2nd Annual Trans Brunch will serve as a kickoff to Pride Week 2019. The LA trans community will be coming together at Flaming Saddles on Santa Monica Boulevard in West Hollywood for an afternoon of great food and drinks, though, unlike some of the other events on the list, this one is invitations only.

At Palihouse in West Hollywood, on June 2nd, a rather unique “celebration of the female force within each and every one of us,” dubbed FEM(ME) will be taking place from 6:30PM to 11:00PM. This is the “official LA Pride women’s kick-off party,” and will include, along with a comedy show, dancing, live performances, and plenty of mixing and mingling, a screening of I Remember Nicole at 7:50PM.

The official opening of the LA Pride Festival will be starting off with a bang in West Hollywood Park on June 7th. This prelude to the Pride Festival, brought to you in part by Ceasar’s Entertainment, will include a grandiose ceremony with a mix of “community leaders, spiritual leaders, and other advocates for the LGBTQ+ community,” along with entertainment from DJs, live performers, and a Weho Vogue Ball & Drag Show. Perhaps the most riveting highlight on the evening’s docket, however, will be a special 60-minute concert from the legendary Paula Abdul.

Taking place over the course of two days — June 8th and 9th — there will be more entertainment to be had at West Hollywood Park, and plenty more performers headlining the 2019 LA Pride Festival. Performances on the Park Stage will include the likes of:

There will be even more performances over at the Plaza Stage, and plenty more to experience in general, so be sure to stay abreast of all the action by checking out all the info available at lapride.org.

2019 Pride on the Boulevard

Also taking place June 8th and 9th will be Pride on the Boulevard in West Hollywood, an assemblage of performances, vendors, exhibitors, beer, attractions, and more. It’ll be fun in the streets, so come prepared for a rowdy and memorable good time.

On June 9th, you can experience the capstone to all the Pride Week festivities — the 2019 LA Pride Parade. This free event will be taking place as it typically does, along Santa Monica Boulevard in West Hollywood, bringing the community together for a unique LA celebration of the LGBTQ+ community and their cherished straight allies in a touching display of unity and togetherness.

Let the Celebrating Continue at the Los Angeles Apartments

When all is said and done, you’ll need some time to rest and recover from the revelry. Eighth and Grand makes for the perfect location to do both. Here, where comfort and convenience are standard, you’ll experience the best of what city living is supposed to be, coupled with a luxurious and cultured atmosphere that makes that experience even more memorable. Come see the classy side of DTLA; learn more about what Eighth & Grand is all about, and prepare to enter a Los Angeles community like no other.