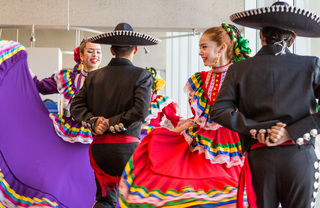 Cinco de Mayo is coming fast, which means that soon, everywhere around the apartments for rent in Los Angeles will be electric with anticipation and excitement for this annual extravaganza, a celebration of Mexican heritage, and, more specifically, a commemoration of one of the last battles with a foreign army in North America:

“Cinco de Mayo, which literally means the Fifth of May in Spanish, is a holiday originating in Puebla, Mexico, to commemorate the last foreign battle on North American soil. The Mexican army defeated the much larger and better-equipped French army in the Battle of Puebla on May 5, 1862.”

There’s no shortage of places across the city to celebrate, but which events should you focus your attention on? That’s exactly what we’re going to help you determine today, as we present you this list of prime Cinco de Mayo options to hone in on for 2019.

Lucha Libre, the term widely used in Mexico to refer to freestyle professional wrestling, has a long history and still draws big crowds with its electrifying, animated live events. Lucha VaVoom has been pleasing the crowds for years (sixteen to be precise) with their riveting shows, and this May 3rd, 4th, and 5th, they’re putting on a Cinco de Mayo special to celebrate the occasion at The Mayan Theatre on South Hill Street.

El Pueblo de Los Angeles Historical Monument, along with legendary Olvera Street, is considered by many to be the birthplace of LA, so their participation in Cinco de Mayo should come as no surprise. There will be a grand celebration here on May 5th and 6th, encompassing all manner of live entertainment, such as mariachis, storytime, arts, crafts, and more. Among the highlights, a theatrical performance of “The Real Cinco de Mayo,” may well take the cake, with special guests like Ballet Folklorico Flor de Mayo and Santa Monica College Global Motion World, and Conjunto Tenocelomeh, so be sure not to miss it!

The beauty of Descanso Gardens in La Canada Flintridge will be the backdrop for this special night on May 3rd, as the main lawn of the gardens will be transformed into a mariachi performance stage, accompanied by an authentic and delicious Mexican meal featuring “barbacoa de mole, cerdo, and other traditional Mexican favorites.” There will even be a bar on site (cash only), so this night will certainly be one replete with mirth and merriment.

This might be Los Angeles’ longest running Taco Festival, presented by LA Taco, and will feature some of the best tacos you can get in the city at the LA Plaza de Cultura y Artes. Participants will include Guerrilla Tacos, Mariscos Jalisco, Ramona's, Carnitas el Momo, Tacos Arabes de Puebla, Sonoratown, Leo's Taco Truck, Burritos La Palma, Chichen Itza, Balam, Taqueria la Venganza and Todo Verde. You’ll also have a chance to pair your taco with some delicious craft beer, and there will be DJs, live art and music, and even a game lounge to keep you entertained.

Viva la Fiesta at the W

The W in Hollywood is known for its swanky, upscale setting, and for Cinco de Mayo, the rooftop will be transformed into a VIP hotspot for a Saturday celebration with live DJ beats, a beautiful skyline view of the city, and even a pool for a Cinco to remember.

Cinco de Mayo plus hot LA clubs? Where do we sign up!? This mega-event, hosted by LA Epic Club Crawls, is actually three separate events: the Cinco de Mayo Bar Crawl (during the day) and the Cinco de Mayo Hollywood and DTLA Club Crawls (hosted at night). In truly epic fashion, you’ll hop between four different bars (or clubs) throughout the day (night if you prefer) and get your fill of revelry and delicious drinks.

Time to party in the streets at Fiesta Broadway! This multi-block street fair will have all you need for a great time: music, games, vendors, and plenty of likeminded Angelenos out and about, ready to enjoy the day. This celebration will take up a few blocks around Grand Park, but it’s important to note that this celebration won’t actually take place on Cinco de Mayo, but instead on April 28th, giving you an opportunity to get a bit of pre-May excitement going before the real thing.

Head out to the Citadel Outlets, and you’ll be able to experience this particular “Fiesta de Mayo,” celebrating both the local community and the rich Mexican heritage that’s woven into Los Angeles. The cornerstone of this gathering will be the great performances, featuring Ballet Folklorico de Alma, Ballet Folklorico Claudia Jeanette, and Ballet Folklorico Ressureccion. In addition, there will be delectable street tacos available in the Center Court, courtesy of Ruby’s Diner.

In Plaza de la Raza in Lincoln Park is where you’ll find the Michelada Music Festival, which will include live acts like La Sonora Dinamita, WC, Petey Pablo, Los Cadetes De Linares, The Twins, Adina Howard, RBL Posse, Diamond Ortiz, and Mariachi Quinto Sol. It’s going down May 4th, and while parking is free, you must be 21 or older to attend this particular shindig, as full bars and a raucous time are to be expected.

At least, when you’re living at fine apartments like Eighth & Grand downtown. Here, among the wonders of LA’s modern Renaissance, you finally see what true urban luxury looks like — surrounded by the comforts and conveniences that modern apartment living can offer. Meanwhile, in the neighborhood, you’ll have access to all the wants and needs you could imagine. Great shopping, fine dining, and a wonderful community to boot — what more could you ask for in the heart of DTLA?