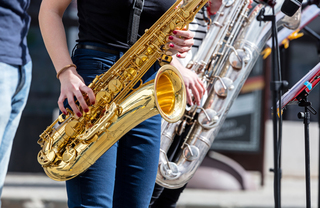 The Swing Era in America began at L.A.’s Palomar Ballroom. Built in 1925, just east of Vermont between 2nd and 3rd, The Palomar is the place where Benny Goodman’s “hot” band cut loose on a hot August night in 1935 and so captivated an audience of dancing teenagers that they stopped jitterbugging and rushed the stage just to watch and listen. It was one of the most significant moments in American popular music.

Though it burned down in ‘39 the spirit of the Palomar – as well as L.A.’s role in jazz history – still lives on. This weekend, July 25th and 26th the Central Avenue Jazz Festival will mark its 20th anniversary celebrating jazz in DTLA. Packed with quality music and great food, the festival will feature three stages and some of L.A.’s best contemporary artists sharing the bill with Kenny Burrell Big Band, Alfredo Rodriguez, Poncho Sanchez and others.

Running 11am until 7pm every day, the festival is FREE. And assuming parking signs are legible, a street spot should be easy to snag along one of the several blocks surrounding the event – between 42nd and 43rd in front of Dunbar Hall. Follow your ears, or follow your nose... as Frank Zappa said, “jazz is not dead… it just smells funny.”

(So there are actually two free music festivals this weekend. If you happen to be on the West Side, you may want to check out KCRW’s Sound in Focus, an outdoor event in Century Park featuring TV On the Radio, De La Soul and Cold War Kids – which goes down every Saturday until August 15 next to the Annenberg Space for Photography.)