" Are These the Best Tattoo Artists in LA? 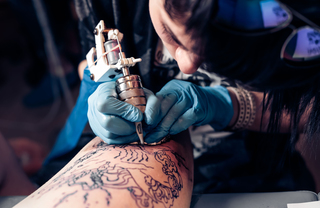 Just because you’re living large in the luxury apartments of Los Angeles doesn’t mean you can’t get an elaborate tattoo. In fact, it might be the perfect form of celebration for your residence in one of these fine, downtown abodes. LA is a big place, however, which means there are tattoo artists abound. That might lead you to question, “where should I go to get my ink?”

Back in 2013, TimeOut Los Angeles ran a feature on what they considered to be the 10 Best Tattoo Artists in LA. It’s been a few years, and, while the list was a fine one at the time, you might want to know if these parlors are still at the top of their game some five years later.

That’s where we come into the picture. Today, we’re going to take a look at those once-revered tattoo masters and let you know if they’re still dazzling Angelenos with their innate creativity, or if they’ve fallen out of favor and into obscurity.

When TimeOut caught up with Jeremy Swan, he was working at Broken Art Tattoo and relishing in the joy of “making his mark” on the citizenry of Los Angeles. Flash forward to the present day, and Swan is still there, available Tuesdays through Saturdays and coming well-recommended by those who grace Broken Art Tattoo’s Doors, with some even dubbing him their “family tattoo artist.” You can check out his works in greater detail on his Instagram page.

Karina Mayorga is an experienced legend, first starting her career as a tattoo artist in 1991, and opening Ink Ink Tattoo in 1995. They’re still going strong today. According to Karina, it’s the oldest tattoo parlor in Venice and the oldest female-owned tattoo studio in the country. You can see Karina’s detailed and extravagant work right there on the site, and see the portfolios of some of her other artists as well.

Spunky and badass — these were two of the most prominent descriptors TimeOut used when profiling Alison Casson, the self-employed fine-arts student turned tattoo maverick. Her “bike-inspired” ink is still in demand, as she is available for appointments and ready to use her artistic talents to adorn your body in the manner of your choosing. Her specialties include “bike-inspired tats, wheel wings, wizards, masonic, Native American vibe stuff,” and the like.

The “Honorable Society Tattoo Parlour & Lounge” certainly evokes some high-class imagery, and Italian-born Marco Cerretelli’s neo-traditional style certainly fit their atmosphere to a tee. Head to Santa Monica, and you’ll still find Cerretelli plying his trade, bringing to life evocative artworks on the canvas that is the human body. You can check out his work here, and will likely be stunned by the detail and precision he’s able to achieve.

The “outspoken” Englishmen moved to LA in 1997 and immediately fell in love with Silver Lake. Though the shop, American Electric, has moved to its new Sunset Boulevard location, Jackman is still tattooing there and is in high demand from the patrons that frequent the parlor. They note that in addition to being a master of his craft, he’s a funny and personable individual — all fantastic qualities that add to his obvious skill.

Body Electric Tattoo has been around since the early-nineties, a “sanctuary of creative self-expression.” Taka Tamada was their specialist in neo-traditional Japanese ink, but has since moved on to Kitsune Tattoo Club, where he works his magic on the residents of DTLA (and those across the city willing to come to the shop). He’s still in high demand, and you can check out more of his body of work here.

Stephanie has been Karina’s partner at Ink Ink Tattoo since 1999, and by most accounts, they still have a great working dynamic:

“Ink Ink’s Karina and Stephanie are both exquisite tattoo artists. I know this because of the persnickety friends I have who patronize them…and because I can see with my own eyes.”

A tattoo professional since 1992, Stephanie is another true master of the craft, aiding Angelenos in achieving their tattoo desires with inimitable style, humor, and grace.

Once an artist at Unbreakable Tattoo, Jim Sylvia, a graduate of the Massachusetts College of Art and Design, now works his magic at Black Anchor Collective, an assemblage of out-of-this-world tattoo masters united at Melrose Avenue in the heart of Hollywood. You can check out his portfolio here, and prepare yourself for some impressive work should you decide to have him complete your ink.

Head to Solid Gallery One in the Fairfax District, and you can still find Jarrett DeMartino running the show and pleasing his clients with his innovative, unique tattooing style. Jarrett considers the tattooing process a “collaborative process between artist and client,” and strives to create a “spotless, one on one environment for [his] clients to achieve their vision.”

Oregon native Zoey Taylor started tattooing at age 16, once had her own parlor, the Zoey Taylor Tattoo Shop, and is now the owner of the Warren Custom Tattoo Shop on Sunset Boulevard in West Hollywood. She’s still going strong, bring the combined vision of her and her clients to life, and you can view here impressive body of work here.

An Inked-Up You at the Luxury Apartments in Los Angeles?

It’s not that much of a stretch. Everybody has tattoos nowadays, and if there’s a place more welcoming than Eighth & Grand, we’ve sure never heard of it. This rental community in Los Angeles’ downtown heart is known for being simultaneously discerning and inclusive. Couple that with the superb style of its spacious residences and the fun perks on offer for all who live here, and you’ve got yourself a city home you’ll not want to leave.