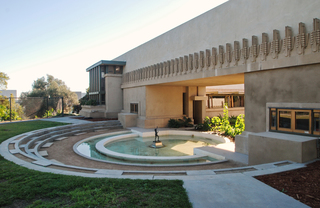 Los Angeles is an architect’s wet dream. Lax building codes in the Southland gave free rein to some of the 20th century’s most creative minds and changed the rules of home construction in America. As traditional Victorians and Craftsmans gave way to ranchers, bungalows and dingbats, the Bauhaus school of modernism in the 20s sparked an explosion of new architecture in L.A.

With his minimalist take on the International style, Frank Lloyd Wright led the way, building three of his most famous houses in Los Feliz: the Mayan revival of the Ennis House (and John Snowden House), as well as the Hollyhock House. Two of his biggest followers were Richard Neutra and Rudolf Schindler. Partners, friends (and eventually enemies), both were adherents to the Wright school of clean lines and floating planes, and together they created L.A. modernism. Schindler’s most significant achievement is the Kings Road House (half pueblo art house, part European modernism) where he and Neutra once lived together with their wives. Neutra’s most important work is the Lovell House on Dundee Drive, the best example of his take on the International style.

By the 30s there was a new kid in town, and his name was John Lautner. Apprentice of Wright and his school of organic architecture, Lautner’s Harpel House in the Hollywood Hills, a midcentury modern with majestic views, is his masterpiece. With his progressive ideas of humane design as well as space-age touches, Lautner created some of the most recognizable and sought after abodes in L.A. (Check out Silvertop overlooking Silver Lake reservoir.) The modernist pioneer also took on several projects in Beverly Hills where you'll find his heavily photographed Sheats-Goldstein residence (you may know it as Jackie Treehorn’s mansion in the Big Lebowski, or the house Mel Gibson blows up in Lethal Weapon 2) across the street from the Playboy mansion on Charring Cross Rd. While his equally infamous Chemosphere House rises like a UFO above the trees in the Hollywood Hills.

From beach bungalows to mega mansions, L.A. has it all. The big 4: Wright, Schindler, Neutra and Lautner – helped define modern living in the Southwest. But L.A. architecture has changed clothes as often as Hollywood has genres. While modernism’s floating planes, glass curtains and cubist utopian fantasies have had their way with many of our historic hoods (and led to a spate of recent neighbor wars over the infestation of McMansions) it turns out that taste is relative. Let’s see what else is out there. Stay tuned for Part 2!